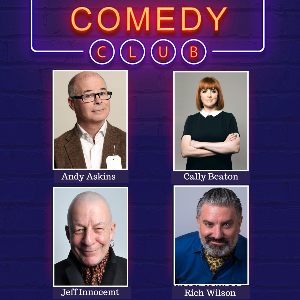 Andy Askins is a diminutive figure who exudes an air of vulnerability as he steps up to the microphone armed with a guitar and a cheeky grin. It’s an overwhelmingly misleading demeanour which serves to heighten the impact of the killer lines that he delivers.

On TV screens, Andy was invited to appear on The John Bishop Show.

Andy has performed several support slots with the mighty Lee Evans, recorded a set for Comedy Central’s The Comedy Store, and accepted invitation to appear for a second consecutive year at the Altitude Comedy Festival in Austria. He has previously had the honour of working with Michael Mcintyre, John Bishop, Jason Manford, Alan Carr, Micky Flanagan, Harry Hill and Jack Dee, to name a few stand-up luminaries. He continues to go from strength to strength in the live comedy world and is highly sought after as a distinctive and original talent.

Headline 2 -
Cally Beaton
Cally is a natural storyteller full of intelligent, distinctive and punchline-rich material. Listed on Chortle 2017: Comedians To Watch, her act is a rollercoaster ride of anecdotes, observations and stuff even your best mate wouldn’t admit to. She is London-based and performs in venues across the UK, as well as regularly appearing on the New York and Amsterdam circuits. Winner of New Comedian of the Year 2018 Piccadilly Comedy Club, her other finalist credits include: Fresh Comedy Knights 2016, Max Turner Prize 2016, Bath Comedy Festival 2016, GothamComedy New Talent New York 2015.
Cally can also be seen on shows such as QI and The Blame Game.

“Cally is a comedy queen – fiery, intelligent and totally original”
Sara Pascoe, Comedian, Actor, Writer
Headline 3 -
Jeff Innocent
Multi award winning comedian Jeff Innocent has reached legendary status among his peers and audiences alike by staying at the top of his game for over 20 years.

His unique appeal lies in the contrast between his east end 'geezer’ appearance and demeanour, and his educated, philosophical delivery and culturally relevant subject matter.

Always original, he continues to cement his position within the history of British stand up comedians with his regular performances on the UK and world live comedy circuit and has recently acquired a whole new generation of fans, through his online viral video clips.
MC -
Rich Wilson

International comedian and podcast host Rich Wilson is one of the countries finest comedians and popularly regarded as the UK’s best MC’s by many top comedians, such as Frank Skinner, Richard Herring and Sarah Millican.

In 2019 he won another comedy award for “Best show of the Festival” with Just Be Botanicals at the Edinburgh Fringe festival. Rich has also worked as a TV warm up on ITV’s Loose Women as well as tour support for Kevin Bridges, Rob Beckett and Clinton Baptiste.