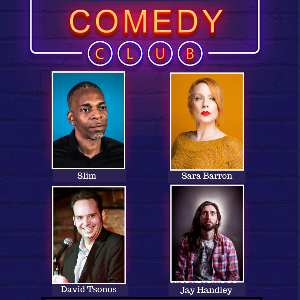 Slim:
Slim's popular and all embracing brand of humour is generous, smart and bursting with infectious energy.
He’s sold out several smash hit tours, including the Hackney Empire numerous times over. Slim has also supported several high profile US acts including Kevin Hart. In 2021 he recorded his latest hit stand up special
Slim: Live at the Palladium.

Slim was also the first Black British act invited to perform at the Hollywood Comedy Store.

In 2020, Slim was one of the stars of
Black, British and Funny (Channel 4), a groundbreaking documentary showcasing legends of the Black British comedy circuit. Other TV credits include
Live at the Apollo
(BBC Two),
Russell Howard Hour (Sky One), The Steph Show (Channel 4).

Sara Barron is one of the fastest-rising comedians of her generation. Since her 2018 debut at the Edinburgh Fringe, she’s starred on shows including
Live at the Apollo
(BBC),
Would I Lie to You?
(BBC) and
Frankie Boyle’s New World Order
(BBC).

Sara’s further television credits include
8 Out of 10 Cats
(C4),
Hypothetical
(DAVE),
Richard Osman’s House of Games
(BBC),
Alan Davies’ As Yet Untitled
(DAVE),
Roast Battle
(Comedy Central) and
Hello, America
(Quibi). On radio, her credits include appearances on
The
News Quiz,
The Now Show, and
Woman’s Hour
on Radio 4.

If you want serious comedy David Tsonos is not your man. His comedy stems from being the youngest of five boys, babysitting his nephews and his cat. He has appeared at the Vancouver Comedy Festival and can be heard on Satellite radio. Whether it’s a Bar gig, a Comedy Club or a Corporate function David makes them laugh until they can laugh no more.

“David Tsonos was outstanding, he dealt so well with the audience and really engaged them.” Barrel Of Laughs Comedy Club

Jay Handley used to make beautiful sculpted oak furniture before fucking it all off to become a comedian instead. A decision that has been financially catastrophic.

That said he does get to
perform all over the country at some of its very best venues. These include The Glee Club, Jongleurs, The Stand, The Comedy Store & Baby Blue.

'A top class comic with a great mix of material...his gags are imaginative, polished and proper proper funny' - 4GoodComedians