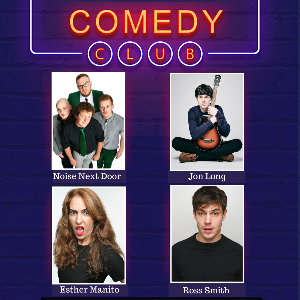 Headline -
Steve Royle
Steve is an actor, writer, comedian, juggler, a "Gillard award" winning presenter on BBC Radio Lancashire and now a finalist on ITV's Britain's Got Talent 2020.
In 2015 he performed 16 nights at The Manchester Arena as part of the "Phoenix Nights Live" show.
He spent many years as "Special Guest" on Dave Spikey's Tours and has supported several other top comedic names including Peter Kay, Mick Miller, Roy Walker and The Lancashire Hotpots! He was also the first comic, ever, to act as "Warm-up" for The Royal Variety Show featuring Take That, Rod Stewart, Barry Manilow and Meatloaf.
Open -
Kelly Convey
Kelly was a finalist in the most prestigious comedy competition in the UK
'So You Think You're funny.' Within a year in comedy, Kelly was signed to the biggest comedy agent in the country.
Kelly Convey has also tour support for Russell Kane & Alan Carr.

Middle -
Darius Davies
The 2017 English Comedian of the Year finalist, Darius is a regular performer at all of the major UK comedy clubs and has also toured internationally. With a particular style akin to a performance poet or faith healer, Darius commands his audience with wonderful charisma – an American style comedian with British soul.

Award winning comedian, actor and writer, one of Tom's major strengths is his ability to adapt to his audience.