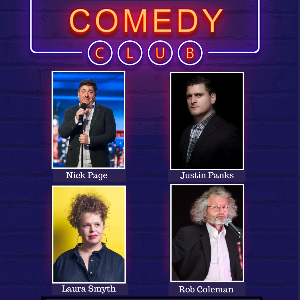 Nick Page won English comedian of the year in 2018 and also reached the live finals of Britains Got Talent in the same year.

In his shows there are no songs, props or padding, just stories packed with jokes from start to finish. The Guardian Newspaper described him as ‘ A bear like man with a host of barely believable stories about life, love and brushes with the law’.

Toting his particular brand of uncompromising ‘Punk-Rock’ comedy, Justin Panks delivers unexpected punchlines and conjures up disturbing mental images that will stay with an audience for a lifetime.

Unapologetically fearless and committed to his cause he wades into the underbelly of everyday life surprising, shocking and delighting audiences with his well crafted jokes disguised as anecdotes.

Laura Smyth is making waves on the comedy scene, this working-class East Londoner won the Funny Women Awards in 2019 only 5 months after her first ever stand-up gig. Steve Bennett described her as ‘a real force-of-nature’ and he wasn’t wrong.

Laura made her comedy TV debut on JONATHAN ROSS’ COMEDY CLUB for ITV last autumn, since then she has appeared on YESTERDAY, TOMORROW AND THE DAY BEFORE for Comedy Cemtral UK and AS YET UNTITLED for Dave.

Rob has been performing stand up for over 10 years, making his way around the country with a mix of beautifully written gags and truish stories, together with some great audience banter.