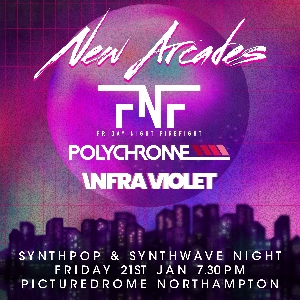 Their music has appeared on films such as ‘Already Tomorrow in Hong Kong’ and ‘A Light Beneath Their Feet’ and they have also contributed an exclusive track for the mobile game ‘RetroDrive’.

They have previously played various shows in the U.K as well as a live studio session for BBC Radio.

They released their second album, In the Deepest of Dreams, on September 17th 2021 via New Retro Wave Records.

They are currently releasing music through AWAL and New Retro Wave Records.


Polychrome
Slacker synth-wave refuseniks Polychrome are based in East London. From hearing them you might say they channel the spirit of Electric Youth and the electronic ecstasy of M83, but you'd be wrong. Polychrome write Sega-Tronic Dreamwave and Synthpop, and as huge fans of the Drive Soundtrack, they love 80s style drum kits vintage microphones and retro keyboards.
Polychrome's self-titled debut album has picked up a cult following, with their particular flavour of nostalgic Dreampop proving popular with TV producers and filmmakers. "Final Kiss" features on fashion brand LA Mania's campaigns across Europe, the soundtracks of Netflix's 'Unorthodox' and 'To All the Boys I've Loved Before', and Amazons 'Red Oaks'. Other songs have synced with brands as diverse as Opal and Vogue

“A record full of heart that others will struggle to match. Stunning. Distinctive, strong, effortless…inspiringly catchy. The next step of Synthwave.” 4/5 THE EXPRESS

‘Dream Tether’ is their debut album, released to overwhelmingly positive acclaim. Pushing the boundaries of Synthwave by combining singer-songwriter, rock, fingerstyle & EDM influences, Infra Violet have poured everything into an emotional, passionate & bold debut, to drive home the lyrical theme of the album; connection. The unspoken tethers that bind us to the environment, our own inner dreams, and each other. The duo took the last year to explore what it really means when we suddenly lose those connections, and the optimistic uncertainty of how to find our way back, now that so much has already been lost.